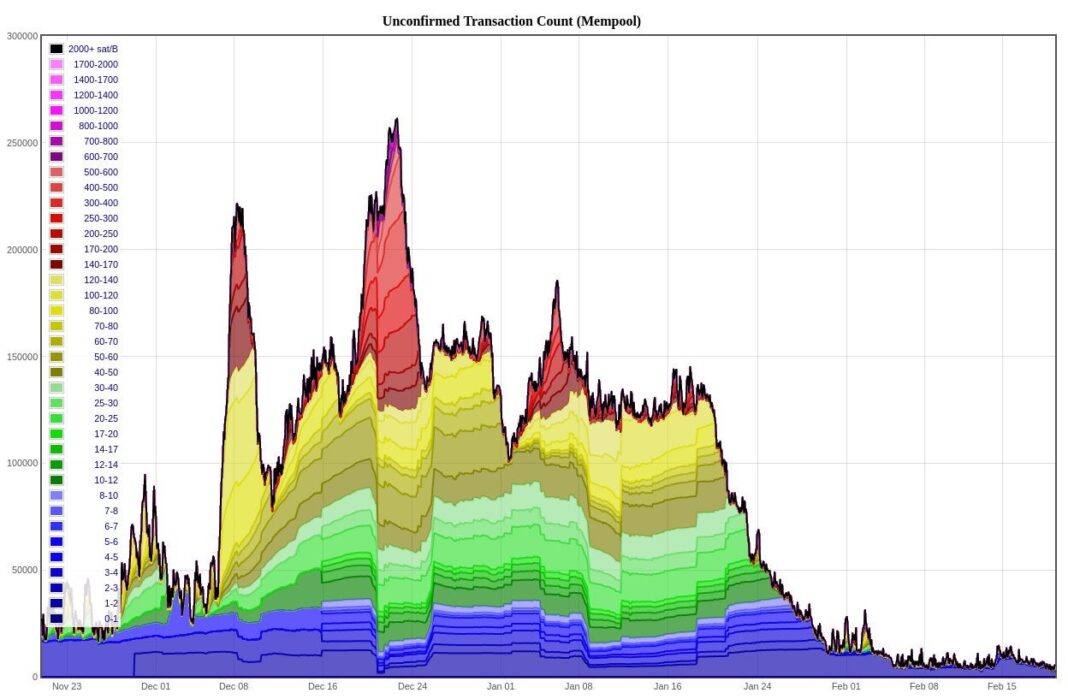 In the last days we have been experiencing a sharp rise in price, which is historically correlated with many people transacting over the Bitcoin network. Many people transacting over the Bitcoin network implies that the blockspace is in popular demand, meaning that when you send a transaction, it has to compete with other transactions for the inclusion in one of the blocks in the future. Miners are motivated by profits and transactions that pay more than other transactions are preferred when mining a new block. Although the network is working as intended (blockspace is a scarce good, subject to supply/demand dynamics, regulated purely by fees), people who are unfamiliar with it might feel worried that their transaction is “stuck” or otherwise somehow lost or “in limbo”. This post attempts to explain how the mempool works, how to optimize fees and that one does not need to worry about their funds.

TL;DR: Your funds are safe. Just be patient* and it'll be confirmed at some point. A transaction either will be confirmed or it never leaves your wallet, so there is nothing to worry about in regards to the safety of your coins.

You can see how the mempool "ebbs and flows", and lower fee transactions get confirmed in the "ebb" times (weekends, nights): https://jochen-hoenicke.de/queue/#0,30d

Here’s how Andreas Antonopoulos describes it:

In bitcoin there is no "in transit". Transactions are atomic meaning they either happen all at once or don't happen at all. There is no situation where they "leave" one wallet and are not simultaneously and instantaneously in the destination address. Either the transaction happened or it didn't. The only time you can't see the funds is if your wallet is hiding them because it is tracking a pending transaction and doesn't want you to try and spend funds that are already being spent in another transaction. It doesn't mean the money is in limbo, it's just your wallet waiting to see the outcome. If that is the case, you just wait. Eventually the transaction will either happen or will be deleted by the network.

tl;dr: your funds are safe

* If you are in hurry there are things like RBF (Replace By Fee) and CPFC (Child Pays For Parent), which you can use to boost your transaction fees; you will need an advanced wallet like Bitcoin Core or Electrum for that though. Keep also in mind that this is not possible with any transaction (RBF requires opt in before sending, f.ex). If nothing else works and your transaction really needs a soon confirmation, you can try and contact a mining pool to ask them if they would include your transaction. Some mining pools even offer a web-interface for this: 1, 2.

If you are interested in trying out those options, here is a very helpful post that goes more into it: What can I do to make my stuck transaction confirm?

How is the speed of confirmations determined in bitcoin?

You can see two important things: the differently coloured layers, each layer representing a different fee (higher layer = higher fees). You can point at a layer and see which fees (expressed in sat/byte) are represented in this layer. You can then deduct which layer your own transaction is currently at, and how far away from the top your position is (miners work through the mempool always from the top, simply because the transactions on top pay them more). You can estimate that each newly mined block removes 1MB from the top (see the third graph which shows the mempool size in MB). On average, a new block is produced every ten minutes. But keep in mind that over time more transactions come into the mempool, so there can be periods where transactions are coming faster than transactions being “processed” by miners.

The second important observation is that the mempool "ebbs and flows", so even the lower paid transactions are periodically being confirmed at some point.

In short: what determines the speed of a confirmation is A) how high you set the fee rate (in sat/vbyte), B) how many other transactions with same or higher fees are currently competing with yours and C) how many transactions with higher paid fees will be broadcast after yours.

A) you can influence directly, B) you can observe in real time, but C) is difficult to predict. So it's always a little tricky to tell when the first confirmation happens if you set your fees low. But it's quite certain that at some point even the cheap transactions will come through.

Good to know: "fee" means the absolute amount of satoshis a transaction pays, and "fee rate" is the fee per weight of a transaction. Miners prioritize by the latter, because even if a "lighter" transaction pays less in absolute satoshis, it might be more profitable to include it into a block if it has higher fee rate, because it also takes up less space. This means, fees expressed in sat/vbyte is what interests us in this context.

So what happens if my transaction stays unconfirmed for days or even weeks?

A transaction with very low fee rate might also disappear from the network if the mempool goes over 300MB in size, because by default a Bitcoin Core node will purge transactions from its internal mempool, starting with the lowest fee rates first, while increasing its minimum acceptable fee rates that it will broadcast further. You can read more about it here. Spikes this large have been very rare in bitcoin's history so far though, I think there was only one, briefly in January 2018.

Important to know: even if the transaction has been forgotten by most nodes and doesn't appear anymore on blockexplorers, it is still a valid transaction and might have stayed in the mempool of a node somewhere. So it's better to use one of the inputs in another transaction to invalidate the original, "stuck" transaction (otherwise you risk it to be re-broadcast and be confirmed when you already forgot about it).

Here are some resources that can help you estimate fees when sending a bitcoin transaction, so you don't end up overpaying (or underpaying) unnecessarily. Keep in mind that in order to take advantage of this, you need a proper bitcoin wallet which allows for custom fee setting. A selection of such wallets you can find here or here.

The order here is roughly from advanced to easy.

The most interesting graph is the third one, which shows you the size of the current mempool in MB and the amount of transactions with different fee levels, which would compete with your transaction if you were to send it right now. This should help you estimating how high you need to set the fee (in sat/byte) in order to have it confirmed "soon". But this also should help you to see that even the low fee transactions get confirmed very regularly, especially on weekends and in the night periods, and that the spikes in the mempool so far have always been temporary. For that you can switch to higher timeframes in the upper right corner, f.ex here is a 30 days view: https://jochen-hoenicke.de/queue/#0,30d. Try higher timerframes as well.

You clearly can see that the mempool is cyclical and you can set a very low fee if you are not in hurry.

This is also an overview of the current mempool status, although less visual than the previous one. It shows you some important stats, like the mempool size, some basic stats of the recent blocks (tx fees, size etc). Most importantly, it makes a projection of how large you need to set your fees in sat/byte if you want your transaction to be included in the next block, or within the next two/three/four blocks. You can see this projection in the left upper corner (the blocks coloured in brown).

This is a simple estimation tool. It shows you the likelihood (in %) of a particular fee size (in sat/byte) to be confirmed within a particular timeframe (measured in hours). It is very simple to use, but the disadvantage is that it shows you estimates only for the next 24 hours. You probably will overpay by this method if your transaction is less time sensitive than that.

This is a very simple bot that tweets out fees projections every hour or so. It tells you how you need to set the fees in order to be confirmed within 1hour/6hours/12hours/1day/3days/1week. Very simple to use.

Hopefully one of these tools will help you save fees for your next bitcoin transaction. Or at least help you understand that even with a very low fee setting your transaction will be confirmed sooner or later. Furthermore, I hope it makes you understand how important it is to use a wallet that allows you to set your own fees.

Thank you to u/MrRGnome and u/fiatjaf for feedback and a special thank you to u/xekyo aka Murch on bitcoin.stackexchange for valuable help and proofreading.

This Bitcoin Whale Trend Suggests a Serious Selloff Could be Imminent